Bumb temporarily restrained the law from blocking guns in “sensitive places” like
casinos, public libraries, museums, bars and restaurants where alcohol is served,
entertainment facilities, private property, unless indicated otherwise by owners,
and private vehicles, according to the ruling in the United States District Court for
the District of New Jersey Camden Vicinage. Lawmakers initially passed the law
in December, which requires New Jersey residents who seek a concealed carry
permit to purchase liability insurance and take training courses, while also
increasing permitting fees and prohibiting firearms in “sensitive places.”

“Defendants cannot demonstrate a history of firearm regulation to support these
challenged provisions for which they have demonstrated Article III standing. The
threat of criminal prosecution for exercising their Second Amendment rights, as
the holders of valid permits from the State to conceal carry handguns, constitutes
irreparable injury on behalf of Plaintiffs, and neither the State nor the public has
an interest in enforcing unconstitutional laws,” Bumb wrote in the ruling.

Judges ordinarily won't grant a TRO against a new law unless they believe the plaintiff is more likely to win the case in court than not.

The NJ law sounds almost identical to the Hawaii proposed bill.  Hopefully someone forces the lawmakers to cool their heels until the half dozen other challenges against "sensitive places" laws are decided.  TROs should be automatic given the nearly identical content of the bills.

Unfortunately, it looks like the tactic is for all anti-gun states to create the same set of unconstitutional laws in order to force each state's citizen's to challenge them individually.

every once in a great while I go to a friend of a friend's farm and shoot.  but I haven't been there in a while
one draw back is my SUV gets super dirty driving on the farm's dirt roads.  small kine off roading

This is what happens when you overlay The Theme from Gilligan's Island with Led Zeppelin's Stairway to Heaven.

General Discussion / Re: we CAN own a full auto AR

And the neighbors' eyes!

And the mail carriers' eyes!

And the stray cats' eyes!

You'll shoot every eye out within a 100 mile radius!

Strategies and Tactics / Re: Muscle Memory Can Be Good or Bad

« on: January 30, 2023, 11:01:29 AM »
Muscle memory as you're using it here is more in your head than in your muscles.  Regular practice with repetition after repetition is what can develop skills.  The fact that you look to the left & right after stopping the threat in front of you has nothing to do with what *is* happening at the moment.  It's about what *could be* happening, but you are so focused on the person in front of you that you would have been mentally unable to break the tunnel vision most of us would experience.

Knowing that you need to check for other threats regardless of the environment (like 5 feet inside the entrance or a wall behind you) isn't the point.  The idea is that you'll be vulnerable if you allow yourself to be transfixed on the first threat.  Having drilled the head turn into your mind, making it automatic, removes the need to decide if you need to check your periphery.  You do it -- every time --  so you don't forget to do it the one time it could save your life.

It's no different than practicing at the range so you know without thinking where your hands belong on the grip, the amount of pressure needed to pull and reset the trigger, etc.  The things you practice eventually become automatic, so you don't have to stop to think about them.  You just do them.

If you start making everything situational, you're going to turn your "skill" into a decision tree that will likely fail under stress.

Think of the skills learned to clear a room/house.  You practice with a variety of threats and "friendlies" so you can recognize when to shoot and when not to while your heart is pounding so hard you can barely hear what's in front of you.

Maybe you can practice turning your head in some situations but not others, but my opinion is you're safer turning your head every time after shooting a threat than you are making a decision whether or not checking for more threats is needed.  The second or two it takes for you to decide could make all the difference.
7

So he was arrested and they found P80's that were unregistered. The AG stated p80/ghost guns are  a problem.  Yet he wasn't charged by feds or state for this crime. Instead he was charged and pleaded guilty with a drug user in possession of ammo.

States/fed know their P80 case is weak and will set precedent for all future cases of this type.

I'm not a lawyer (my scruples are still intact), but I'd guess the arrestee was offered a reduced charge if they would plea guilty -- likely a misdemeanor.  It's routine to use a felony charge as leverage to obtain a plea deal and avoid having to go through a trial.

Just guessing, but I think that's more likely than a concerted effort to avoid the risk of an unfavorable verdict for a questionable law.
8 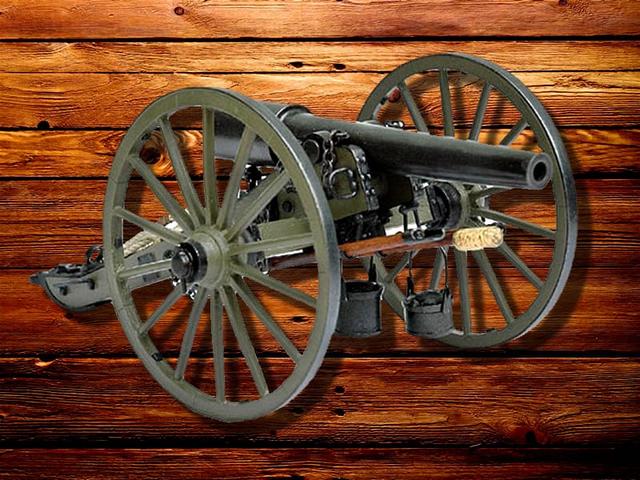 The Parrott Rifle  was a type of muzzle-loading rifled artillery weapon
used extensively in the American Civil War. The gun was invented by
Captain Robert Parker Parrott, a West Point graduate. He resigned from
the service in 1836 and became the superintendent of the West Point
Foundry in Cold Spring, New York.

He created the first Parrott Rifle (and corresponding projectile) in 1860
and patented it in 1861.

I'm guessing you won't be bothered much during the impending apocalypse.  Plenty of inoperable cars and auto parts places where you'll be able to scavenge "ammo".

At least the filters are an American brand!

This is all about government control which is insidious.

I have a cannon in my front yard does that scare you?
I haven't killed any of my neighbors with it, it is simply aimed at the gate  government agents
will use to trespass on my property.
Who is afraid of that?
Just the government, everybody else is merely curious.
I'm not a threat and they know it.
Government thinks we are all threats.
What is that saying about having a hammer, everything looks like a nail?
There should be be some limitations, like mental ill people, Democrats,
felons, and non-citizens from bearing arms, but other than that,
it should be Constitutional carry as a citizen sees fit.
regardless of the weapon.

In my opinion, it's not about them fearing the people rising up with arms against them.  They have said time and again since they have control of the military and more effective weapons than the public.  Their feeling is that we are not threats -- other than the rogue madman who goes after an individual or group in public specifically.

They manufacture fear and division by pretending anyone with 3 guns and more than 100 rounds of ammo is a future mass shooter or workplace murderer who's one step from "going postal" for the sole purpose of ginning up support for gun control in order to raise campaign contributions.


Cannons are often mentioned by anti-gunners as an example of what you can't own.  There's no law against it, but there are usually local laws pertaining to where and how it can be used.

What they miss is the fact that a pre-20th century cannon is not classified as a firearm -- so their argument is wrong on its face.  However, if it has a bore diameter of .50 inches or greater and has no sporting purpose, it falls under the NFA as a destructive device and requires the $200 tax stamp and NFA application (it's considered artillery).  In addition, any projectile with a explosive charge (not including the propellant) must also be registered as a destructive device with stamp.

Muzzleloading cannons manufactured in or before 1898 (and replicas thereof) that
are not capable of firing fixed ammunition are considered antiques and not subject
to the provisions of either the Gun Control Act (GCA) or National Firearms Act (NFA).

For the purposes of the National Firearms Act, the term “Destructive Device” means:

- A missile having an explosive or incendiary charge of more than 1/4 oz.

- Any type of weapon by whatever name known which will, or which may readily be
converted to expel a projectile, by the action of an explosive or other propellant, the
barrel or barrels of which have a bore greater than one-half inch in diameter.

THE MORE YOU KNOW
11

Well, the 2A does not even specifically mention firearms when declaring our right to bear arms.

Could have been inferring swords or pocketknives?

That easy to twist clear intent around.

The Second Amendment protects an individual right to possess a firearm
unconnected with service in a militia, and to use that arm for traditionally lawful
purposes, such as self-defense within the home.

The founders used the word "arms" because they understood that (a) not everyone can afford to acquire and feed a firearm, and (b) at that time, there existed many arms which were more accurate and effective than a firearm in the hands of someone more experienced with them, such as swords, knives, bow & arrow, and so on.  To name a specific arm would have implied the amendment excludes all other arms, so they opted for a more generic term.
12

General Discussion / Re: How's the line at HPD?

Of course, the title will have to be updated to The Woken Dead or something similar.

And i hear the Saviors are now all Vegan.

I said, "Pretend you're fighting off a boa constrictor."